Hello everyone! Hallows of Dusky Hallows here, and I'm gonna do my best to provide something of a walkthrough for Sanguine Rose. Writing a full walkthrough is a little tricky, because many of the routes intersect, or have slight variations which are almost unnoticeable, so I'll mostly be focusing on how to unlock all the items in the gallery rather than trying to show every possible story variation.

There's three different types of choices in Sanguine Rose. Story altering, Scene altering, and Expressive. Story altering choices are the ones which decide which scenes play out, and which endings you get. Scene altering choices change the flow of a scene, and unlock different artwork within those scenes, but don't necessarily affect the story in any way. Expressive choices can change how characters interact, or the perspective of a scene, or provide additional information about the world and its characters, but they don't effect the content you unlock and are a means for you to get into the minds of the characters, or to learn about the world. Some choices fall into more than one of these categories, but we'll mostly be focusing on the story altering choices here. With that out of the way, let's go through the game beat by beat. 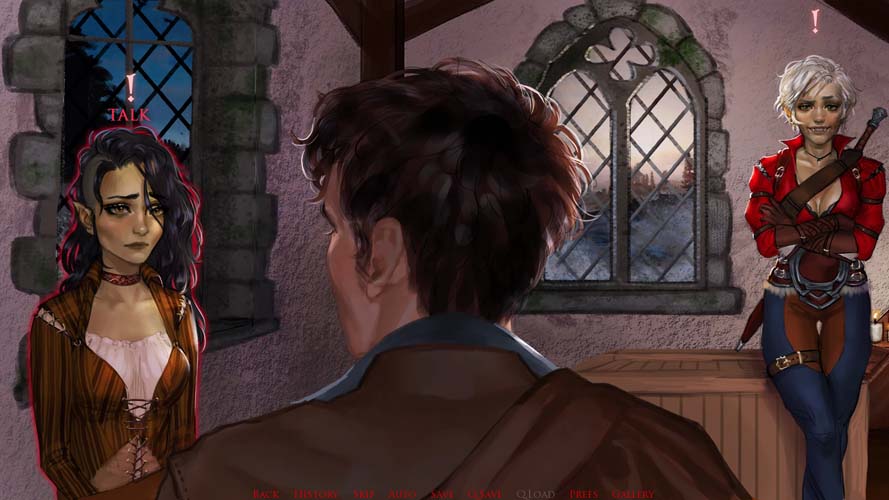 At the start of the game you have the option to talk to Crow and Glasha before proceeding. This is purely an expressive choice. Although talking to Glasha multiple times here can alter dialogue later in the game, it doesn't affect the scenes that play out of what endings you can get. This is an opportunity for new players to meet the characters and learn a little about their present situation. If you've already beaten the game once and you're fishing for all the content, you can ignore this. 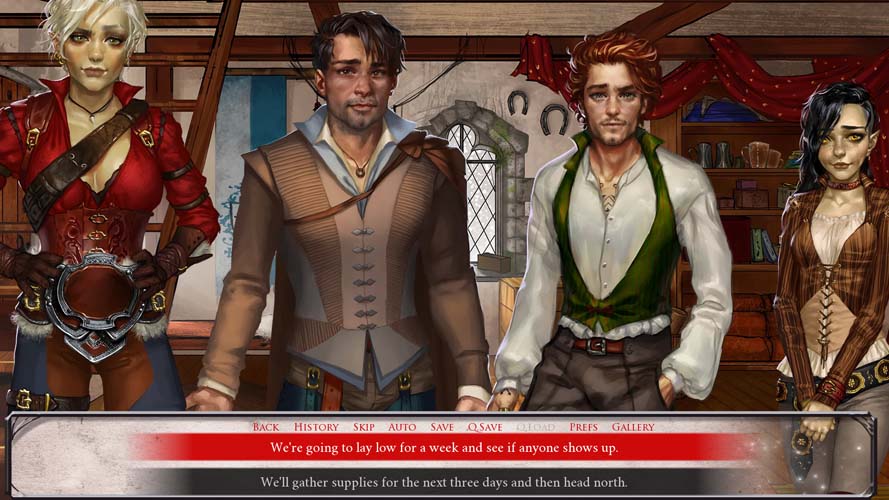 This is the choice that matters, arguably the most important choice in the game when it comes to unlocking all the content. There are several scenes which can only be unlocked by laying low, and several more which can only be unlocked by gathering supplies from Whitewood. More importantly, certain endings depend on this choice. I'll list which scenes are locked to each choice below, but we'll be going into more detail shortly.

*There is a single gallery item in the Negotiation Scene that only unlocks if you fed Carmen on her knees the night before.1 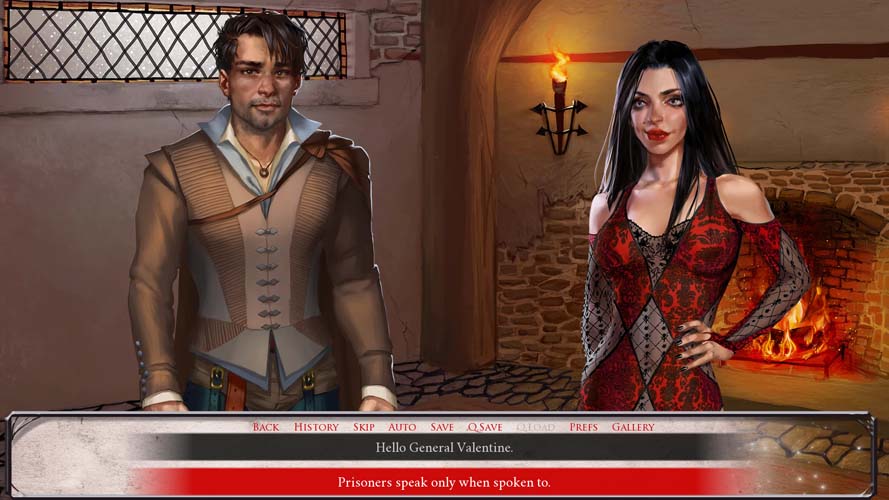 Regardless of what you choose, Roman will go down to watch Carmen. The first four choices here are all expressive only. These choices can affect dialogue later in the game, but they don't affect the scenes you unlock or the endings in any meaningful way. They're a chance for you to get into the role of Roman and decide what kind of person he is. After the four choices, things go differently depending on which choice you picked at the start.

Laying Low: Glasha and Crow will head into the woods to gather supplies, and you'll have the option to swap with Markus. This lets you skip the Carmen Anecdotes scene if you've already played both versions of it, but otherwise doesn't affect the game. Your choices here won't impact the endings you can get until Roman goes down to feed Carmen later, so if you're on this route just choose whichever options you like.

Go to Town: Glasha will try to persuade you to let her go to Whitewood instead of Crow. If you refuse, you can then offer to swap shifts with her yourself, or you can refuse to swap any shifts. These choices are very important. 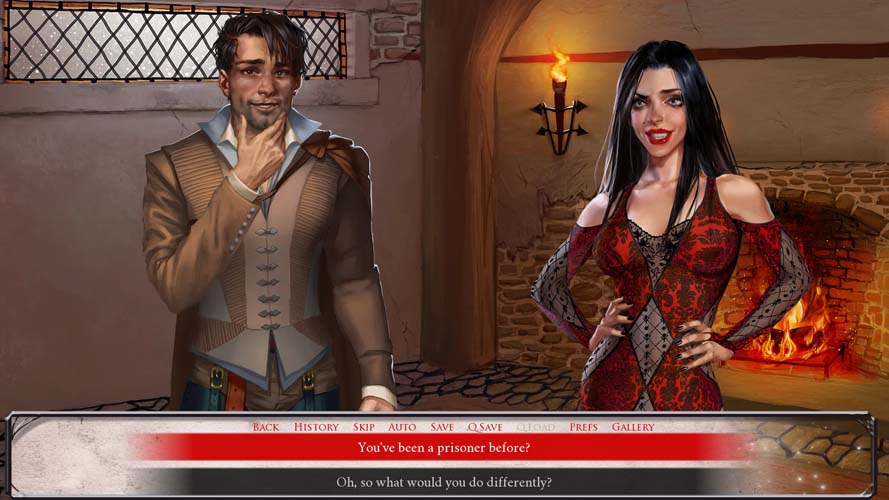 If you watch Carmen again during the first day, she'll try to tell you stories. You get very different stories depending on which of these two options you pick, and it can affect dialogue in later scenes, but it doesn't affect which scenes you unlock or how the game ends. I won't be listing all scenes like this, so assume that if a scene's options aren't mentioned in this walkthrough that those choices only affect the scene containing them. 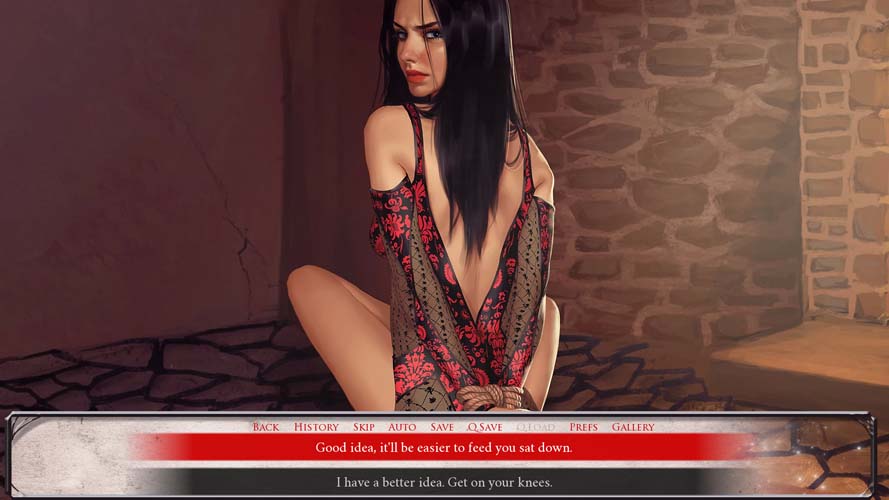 If you're laying low then the first day ends with Roman going down to feed Carmen. Your choices here change how the scene plays out, but one of them changes the rest of the game. You can insist that Carmen gets on her knees, or you can allow her to sit on a barrel. If she eats on her knees, she performs oral on you. If she eats on the barrel, you perform oral on her. 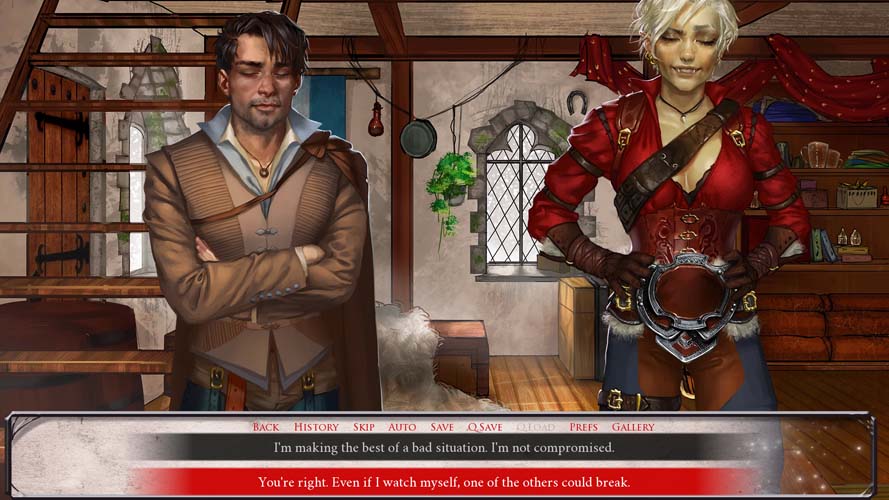 If you're laying low and fed Carmen on her knees then Glasha wakes you up at the start of Day 2. You'll go back and forth a little, and eventually Glasha will ask if you're sure you can trust yourself around Carmen, which gives you these two options. Neither one immediately affects how the game progresses or the scenes you unlock, but the second option, highlighted above, is a necessary step to getting the poison Carmen ending. It doesn't lock you into that route though, so you can pick this option and still choose to not poison Carmen. 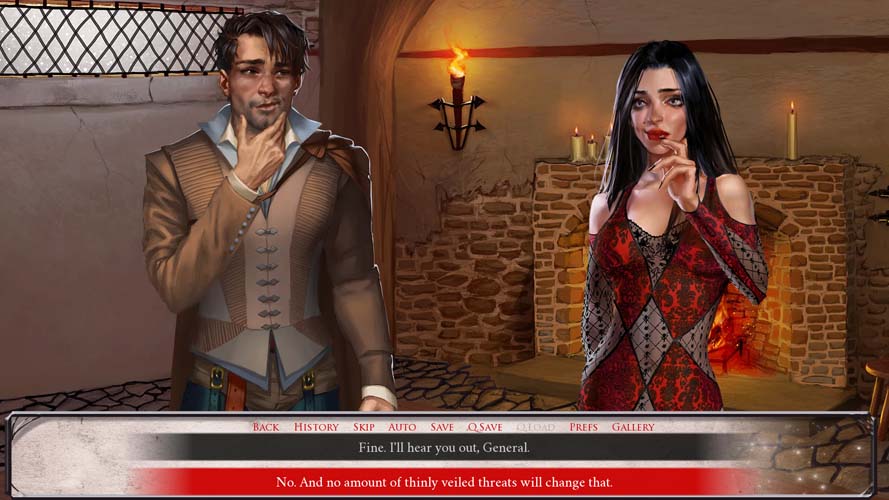 So long as you're not locked into one of the linear routes, you'll speak with Carmen during the second day and she'll try to convince you to let her negotiate. This happens whether you lay low or go to town. Exactly how she proposes you listen to her varies depending on the choices you've made, and in the go to town routes she will also ask if you like how she's been corrupting Crow. In any case, you can either approve of Carmen's actions and agree to listen to her, or you can disapprove and refuse to negotiate. This is another choice that matters. 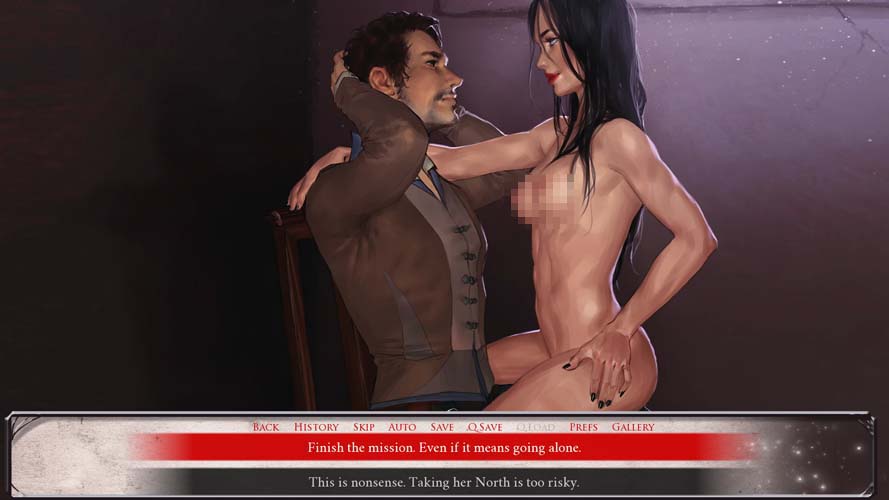 So long as you're not locked into one of the linear routes, day 3 begins with Roman musing over his options, and reflecting on what's happened so far. If you've done everything right for the Poison Carmen end then you'll see the above choice. If you choose to finish the mission, you'll be locked into poisoning Carmen. If you choose the other option, you'll fall back into the main route for Lay Low.

In any of the main routes, you'll have the option to either abandon the mission (usually phrased as "cut your losses" or "don't risk the others") or you can release Carmen (usually phrased as "can't leave empty handed" or "they knew the risks"). Almost every route slightly alters how the abandon and release endings play out, at least in terms of dialogue, but the abandon route changes the most. Pay attention to the list of all endings below to see what the variations are and how to get them:

I hope this helps those of you looking to unlock every gallery item!

Worst walkthrough I have ever seen.  Whoever wrote this has to be a complete moron.

This is one of the messiest and most obtuse "walkthroughs" I have ever seen. I'd strongly suggest whoever wrote this to look at some VN walkthroughs for an idea. At the very least, ending lists/order. This is an incredible eye-sore.

There's a fanmade walkthrough on our Steam Community Hub that's probably closer to what you're looking for. - Hallows

Are you playing with animations turned on? Does the animation in the Wholesome scene unlock?

Is there any sexual scene between Ash and Carmen? If so how does one get it?

The novel is amazing, to be honest, its a bit sad to make a walkthrough because half the fun of reading VNs is discovering the new branches and paths...but I understand how that can frustrate some people, but just know that I really love your work and writing

If I were Roman and figured out being used by my employer, I'd release Carmen right away, or just kill her (which shouldn't be difficult) so she wouldn't come after me later.

Oh, God, thank you so much! I wish you good luck and all the best! I look forward to further releases.

You're welcome :D Thanks! - Hallows